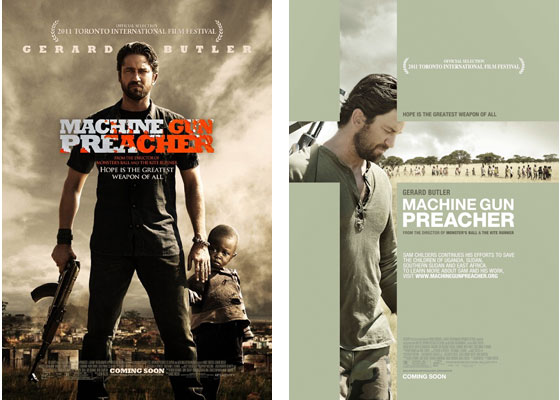 Studio releases “secular” and “faith-based” versions of poster for film;

The movie, opening in limited release on September 23, is based on the true story of Sam Childers, a drug-dealing hell raiser as a teen and young man who began to turn his life around after finding Jesus. Today, he spends much of his time in Somalia and neighboring countries, allegedly fighting pockets of the LRA (Lord’s Republican Army) with his own band of gun-toting rebels while sweeping up orphans who have been left behind — and then putting them into orphanages that he has built-in the area.

Some Christians will love the film for showing Childers’ path from rebellion to redemption. Others will hate it for the same reason; the first 15-20 minutes are as in-your-face and gritty as anything you’ll see in an R-rated movie (which it is), with a sex scene, drug dealing (and taking), brutal violence, and sordid language. Even after Childers — played terrifically by Gerard Butler — finds God, he’s still got some rough edges, and his flaws stick with him through the rest of the movie.