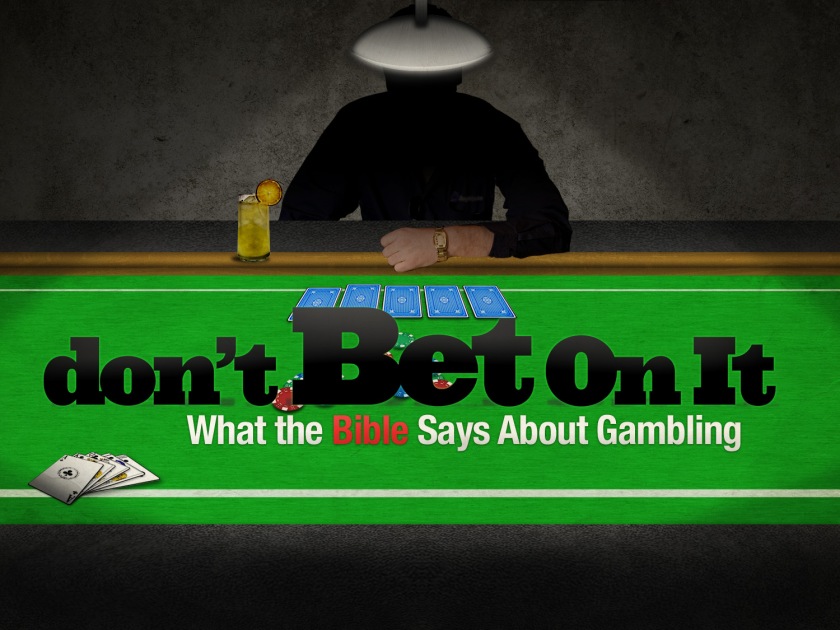 1. Gambling is wrong because it is a disregard of responsible stewardship.
The Bible clearly teaches that all things belong to God. “The earth is the LORD’s, and everything in it, the world, and all who live in it” (Psalm 24:1). Since all things belong to God, people are placed in the position of stewards who must give a proper accounting for everything given to them in trust.
The first step in a faithful administration of this stewardship is the giving of self to God. Believers must recognize they are not their own (1 Corinthians 6:19). They have been redeemed with a price, not of silver or gold, but with the precious blood of Jesus (1 Peter 1:18,19). The churches of Macedonia set a worthy example of personal dedication when “they gave themselves first to the Lord” (2 Corinthians 8:5). Life, with all it involves, is a stewardship to be administered for the glory of God.

People who honestly dedicate themselves to God will also recognize that all they possess must be handled as a stewardship. The Parable of the Talents (Matthew 25:14–30) indicates that the good and faithful servants administered the talents entrusted to them in such a way that the master was pleased. The wicked and slothful servant failed in his administration and suffered the appropriate consequences.

When people recognize their stewardship responsibilities they will not consider gambling in any form a proper administration of divinely bestowed resources, time, and ability. Even the ethics of the world will not tolerate those who gamble with resources put in their trust. Christian responsibility transcends all other responsibility, and for the Christian, gambling is wrong. It is a total disregard of the principle of stewardship. It is a prostitution of God-given assets which should be used to glorify God and advance His kingdom.

2. Gambling is wrong because it involves a chance of gain at the expense and suffering of others.
The nature of gambling is such that a person has a chance of gain only because others have suffered loss. The economic benefits come only to a very few. The financial loss is borne by many who usually can least afford it. The fact that people involved in gambling are commonly referred to in derogatory terms by its promoters is an indication of the status to which they are reduced. Whether or not the financial loss is excessive, gamblers are basically the losers while the operators of gambling establishments are the winners.

The suffering caused by gambling is totally inconsistent with the teaching of Scripture concerning love. Not only is the Christian to love those who are lovable, but even enemies. God’s people are to love their neighbors as themselves. The principle of love will prevent Christians from gambling because of the damage it does to others. The principle of love will cause Christians to oppose any effort by the state or any other organization to legalize any activity based on a weakness of people which degrades society.

William Temple, late Archbishop of Canterbury, stated the Christian position well when he wrote:
Gambling challenges that view of life which the Christian church exists to uphold and extend. Its glorification of mere chance is a denial of the divine order of nature. To risk money haphazardly is to disregard the insistence of the Church in every age of living faith that possessions are a trust, and that men must account to God for their use. The persistent appeal to covetousness is fundamentally opposed to the unselfishness which was taught by Jesus Christ and by the New Testament as a whole. The attempt (inseparable from gambling) to make profit out of the inevitable loss and possible suffering of others is the antithesis of that love of one’s neighbor on which our Lord insisted.3
3. Gambling is wrong because it is inconsistent with the work ethic of Scripture.
Throughout Scripture the importance of work is emphasized. In several places the correlation between working and eating is stated. The Old Testament reminds us, “He who works his land will have abundant food” (Proverbs 12:11).

In the New Testament the same principle is stated with great forcefulness. To the Thessalonians Paul wrote: “When we were with you, we gave you this rule: ‘If a man will not work, he shall not eat’ ” (2 Thessalonians 3:10).

Not only does the Bible require that one should work for the necessities of life, but it also warns against the something for nothing, get-rich-quick approach. “One eager to get rich will not go unpunished” (Proverbs 28:20). “He that hasteth to be rich hath an evil [envious] eye, and considereth not that poverty shall come upon him” (Proverbs 28:22, KJV). “Dishonest money dwindles away, but he who gathers money little by little makes it grow” (Proverbs 13:11).
In the wisdom of God work was assigned in the garden of Eden even before the Fall (Genesis 2:15ff; cf.1:28). Though sin resulted in a change of the nature of work (Genesis 3:17,19), the responsibility of working was never rescinded. Any effort to circumvent the work ethic of Scripture can result only in failure. Gambling, whether to secure wealth in a hurry or to place bread on the table, is inconsistent with what the Bible teaches about work.

4. Gambling is wrong because it tends to be habit forming.
Gambling, like other evils, has a tendency to become an addiction. As in the case of alcoholics and drug addicts, compulsive gamblers are dominated to the extent that they risk not only money, but everything meaningful in life. They have lost control of themselves.
This condition is contrary to the teaching of Scripture. The Word of God points out that a Christian will refuse to be brought under the power even of lawful things (1 Corinthians 6:12). The person indwelled by the Holy Spirit will be characterized by temperance, or self-control (Galatians 5:23).
Those who have studied gambling addiction seem to agree there are six symptoms characteristic of compulsive gambling:
(1) The activity becomes chronically repetitive.
(2) It becomes a mania which precludes all other interests, including the home.
(3) A pathologic optimism replaces the ability to learn from previous losing experiences.
(4) The ability to stop in a winning situation no longer exists.
(5) In spite of initial decisions to gamble only so much the addict invariably risks too much.
(6) The activity seems to produce an enjoyable tension consisting of both pain and pleasure.

It is obvious that habitual gamblers are under the control of the compulsion to gamble. Rather than being servants of God, they are servants of a desire they cannot handle. Paul described the condition clearly when he wrote, “Don’t you know that when you offer yourselves to someone to obey him as slaves, you are slaves to the one whom you obey?” (Romans 6:16). Because of the degrading possibility of addiction, gambling should be considered an evil.

Christian Responsibility in Relation to Gambling
When the various truths of God’s Word are considered, Christians cannot adopt a neutral stance toward gambling. There are responsibilities which they cannot ignore.