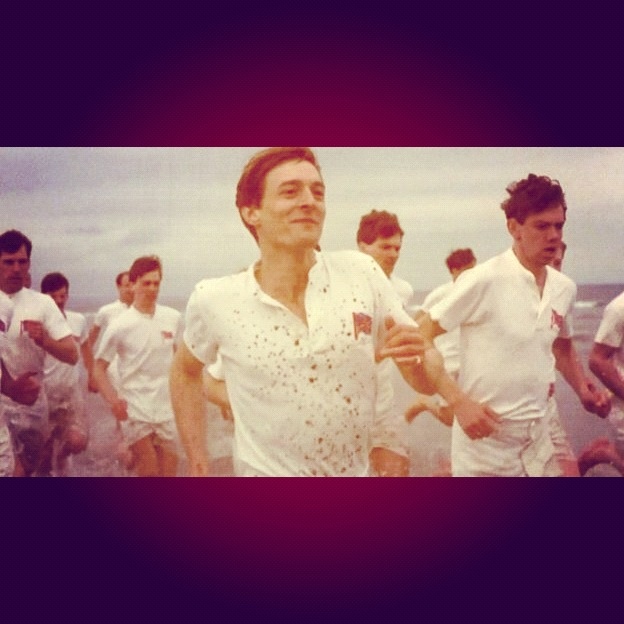 With the London Olympic Games approaching, Chariots of Fire, the 1981 Best Picture Oscar-winner and perennial family favorite, is back. I read somewhere that the movie is being shown all over london in order to put people in the spirit of the Olympics and recapturing their imagination. I thought it was a brilliant idea, so I too am going to be watching the movie at least once a week for the duration of the Olympics. My motivation is of course is to improve my spiritual skills to compete in this race that I am in. I want to fire myself up, bringing my running to a whole new level.

For those of you unfamiliar with or have forgotten the story, Harold Abrahams was an English Jew who overcame the ingrained anti-Semitism of the British establishment, while Eric Liddell was a committed Scottish Christian and son of missionaries to China who refused to run the 100 meter sprint – because it fell on a Sunday. He however went on to win gold in the 400 meters.
The story of their struggle against the obstacles, and each other, was first told in a 1981 film that struck a chord around the world, becoming a surprise box office hit and winning four Academy Awards.

Allow me to leave you with some pointers on how to keep yourself fired up for God doing the summer Olympic. Here are some thoughts for reflection from the movie:

Spiritual Lessons from the Movie

Hard Choices
It is a simple story about making the hard choice. The movie makes audiences ask themselves whether they too could make such a hard choice. In other words, think about your life.
What is the greatest pressure in your life today and how or what are you doing to cope or deal with that pressure?

Sacrifice
It is a simple story about sacrifice. One of the lasting impressions you get from this movie comes from its sincere depiction of a believer who sacrificed for his theological convictions, despite severe criticism. I don’t think anything is wrong with running on Sunday, but I applaud Liddell’s courage to give up his dream if it stood in the way of pleasing God or putting him first.
Is there anything you are willing to give up today? Anything that stands opposed to God’s will? Is there anything that has become first place and far more important than pleasing God?

In the world, but not part of it
It is a simple story that provides wisdom to help us live in balance. Liddell provided a model for understanding how to be “in the world, but not of it.” He believed that his service to God included being a missionary and an athlete, and that he must be faithful in both roles. As his character famously said, “I believe God made me for a purpose. But He also made me fast, and when I run I feel His pleasure.”
Some people claim that there two types of jobs in the world, one secular and the other divine. One that is special, holy and has upon it God’s stamp of approval. The other – secular, not necessarily evil, but not as special as the other. I think that is none sense. Everyone of us have a gift, a talent a vocation given to us from God. It is a calling. Some are called to be pastors, others are called to be doctors.
How do you see your vocation? Do you see it as secular and not divine? Or do you see it as a calling to serve God, a way to bring glory to God?

Dedication
It is a simple story about dedication. Chariots of Fire ends with a brief statement about Eric Liddell’s later life. We learn that he turned his back on fame and fortune in order to go to China as a missionary, where he subsequently died.
Who or what are we dedicated to, and how do we demonstrate this dedication through our lives?

Passion
It is a simple story about the pursuing one’s passion. In the movie, Harold Abrahams devotes himself to his training, but his determination to prove himself means that he sometimes excludes others. Eric Liddell runs to honour those around him, and to worship God. Watching what happens to Harold and Eric as they each achieve their goals, we’re given pause for thought.
As we run the race of life, does our passion cause us to look inwards focused, or outward, focused?

Please check back for part two: how to stay fire up for God during the Olympics